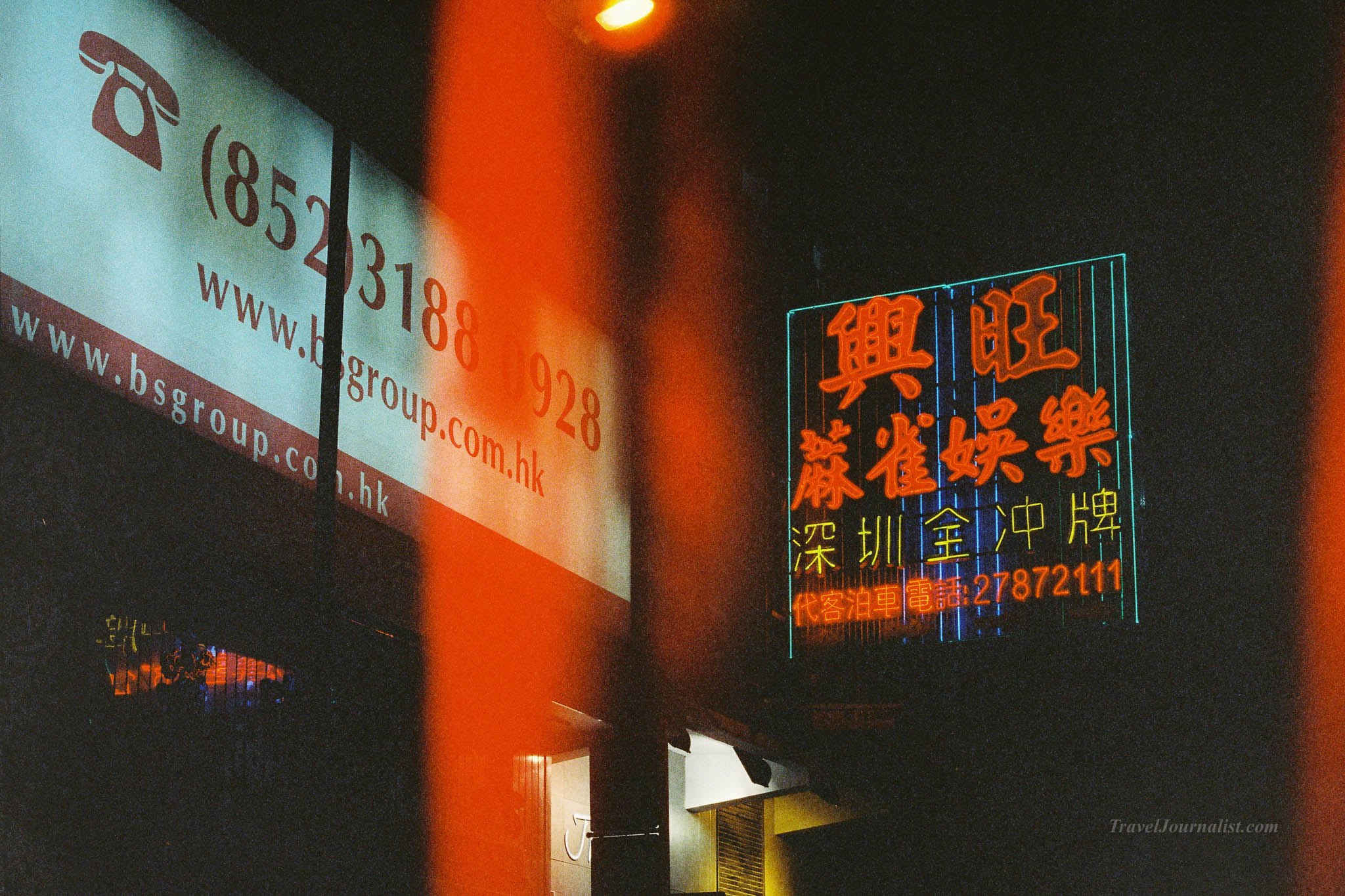 So I went to Mong Kok, one of the busiest place in the world, and the neighbourhood where we can find a lot of signs. This is the first picture of the roll. As always with Cinestill, the first picture has a light leak. I like it! 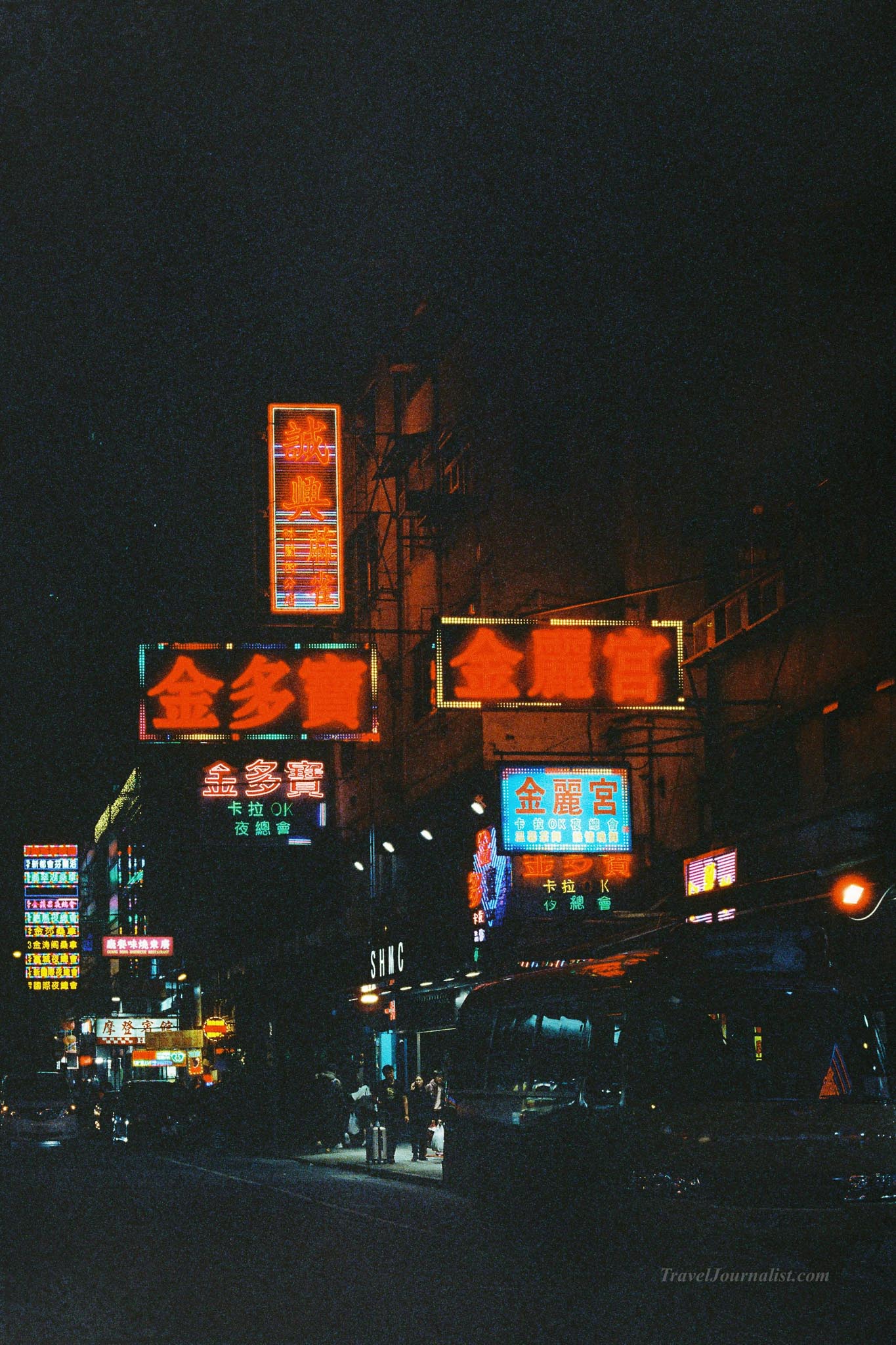 I choose to shoot Cinestill 800T because of this halo effect that could give the pictures a special look. Even if I had my Leica M6 and the Noctilux lens, I needed a high ISO because I didn’t want to shoot everything at 0.95. I did a challenge with one roll at 0.95 in Central Hong Kong and I will publish the pictures soon.

But here, I wanted a deep depth of field to capture not only the neons but the life in the street. So I decided to push the film 2 stops, and to meter my camera at ISO 3200.  At the same time I thought it would be an interesting experience to push this film 2 stops.

When I saw the result I was glad that I shot at 3200 because some pictures were really dark. 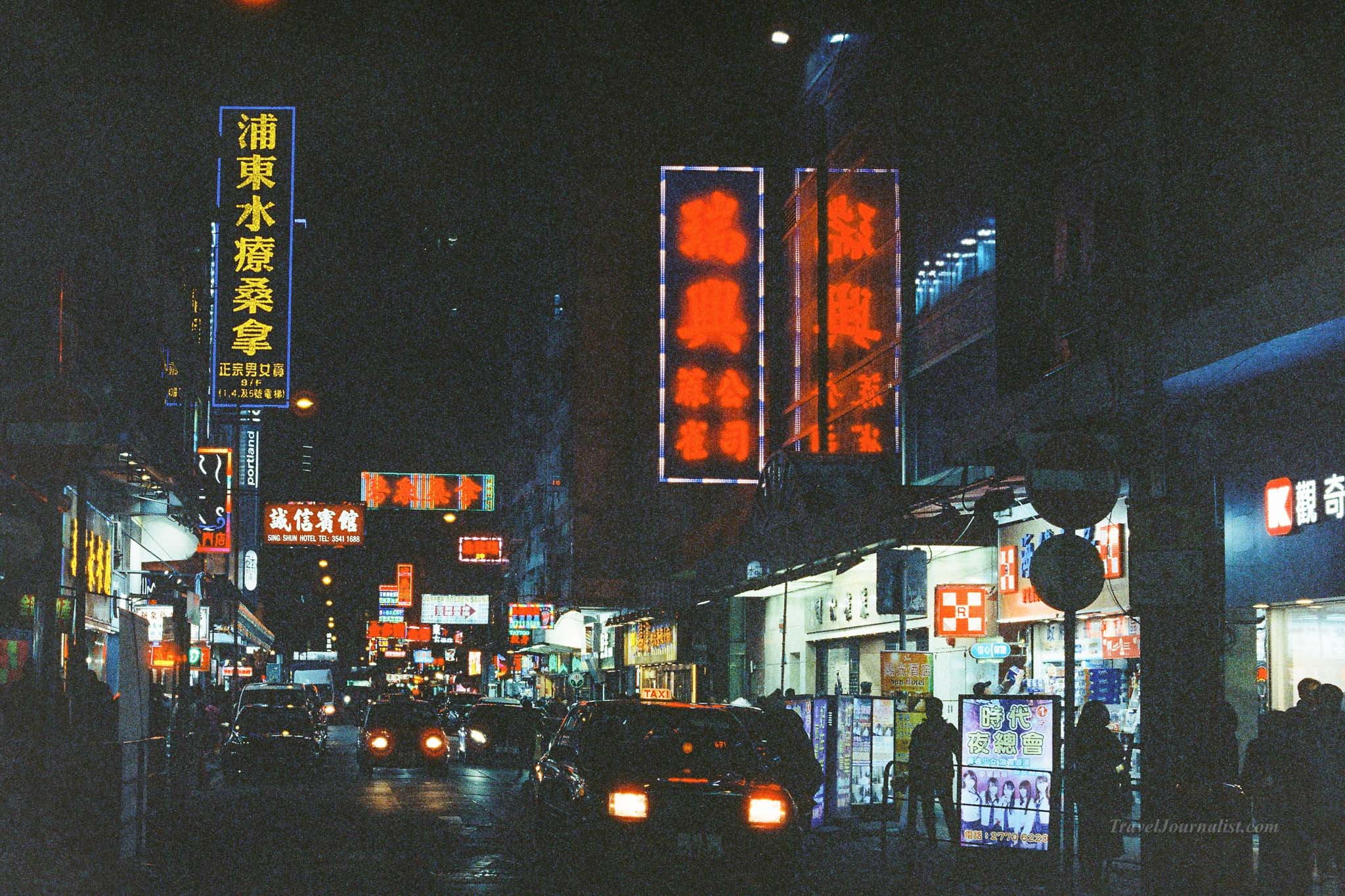 A challenge when you shoot neons is that  you expose for the signs and consequently the rest of the picture is very dark. If you expose for the street, the street will be visible but the neons will be blown out. You have to find a compromise if you want the entire picture to be correctly exposed. Film has not the same dynamic range as digital. 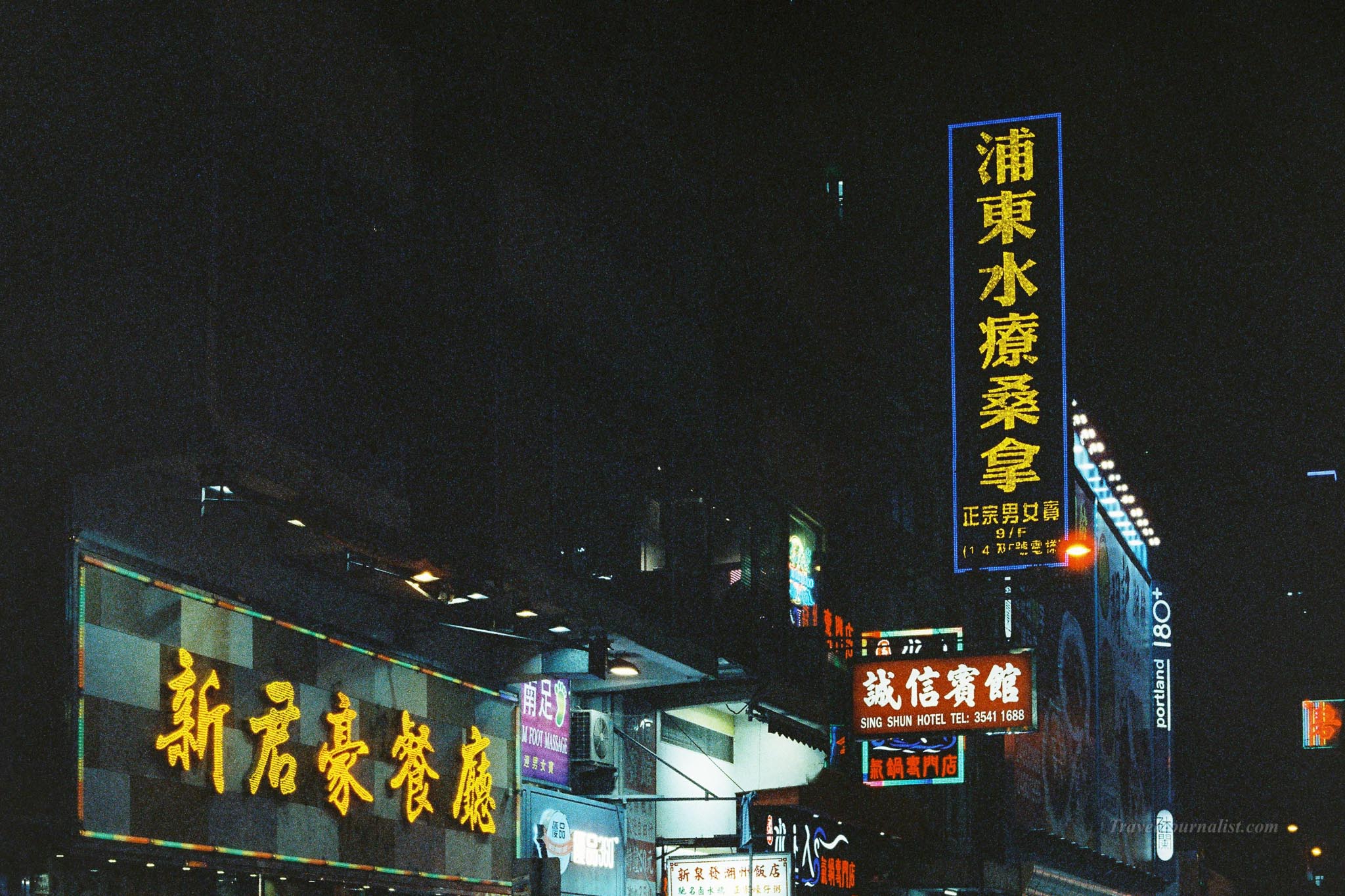 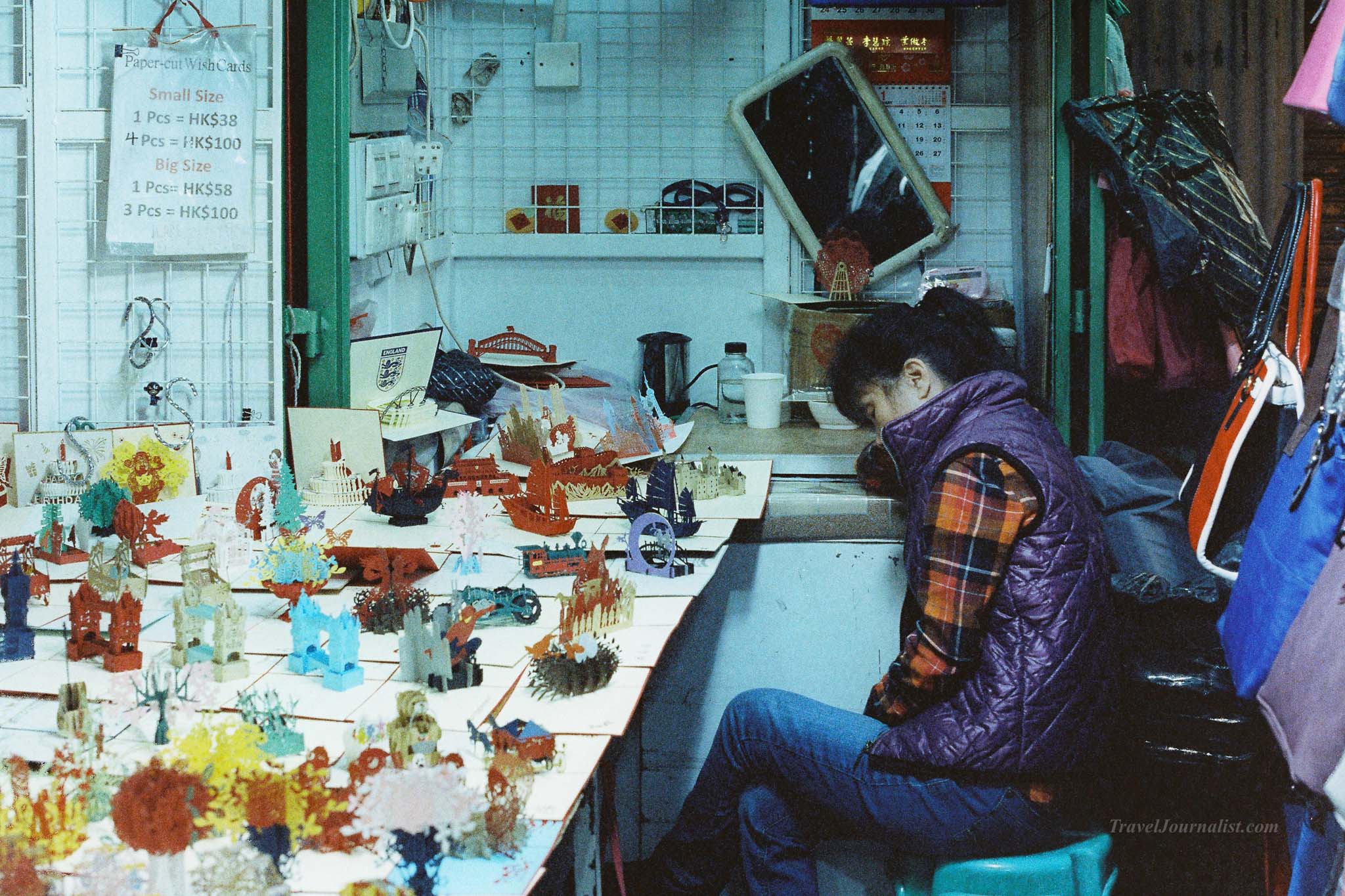 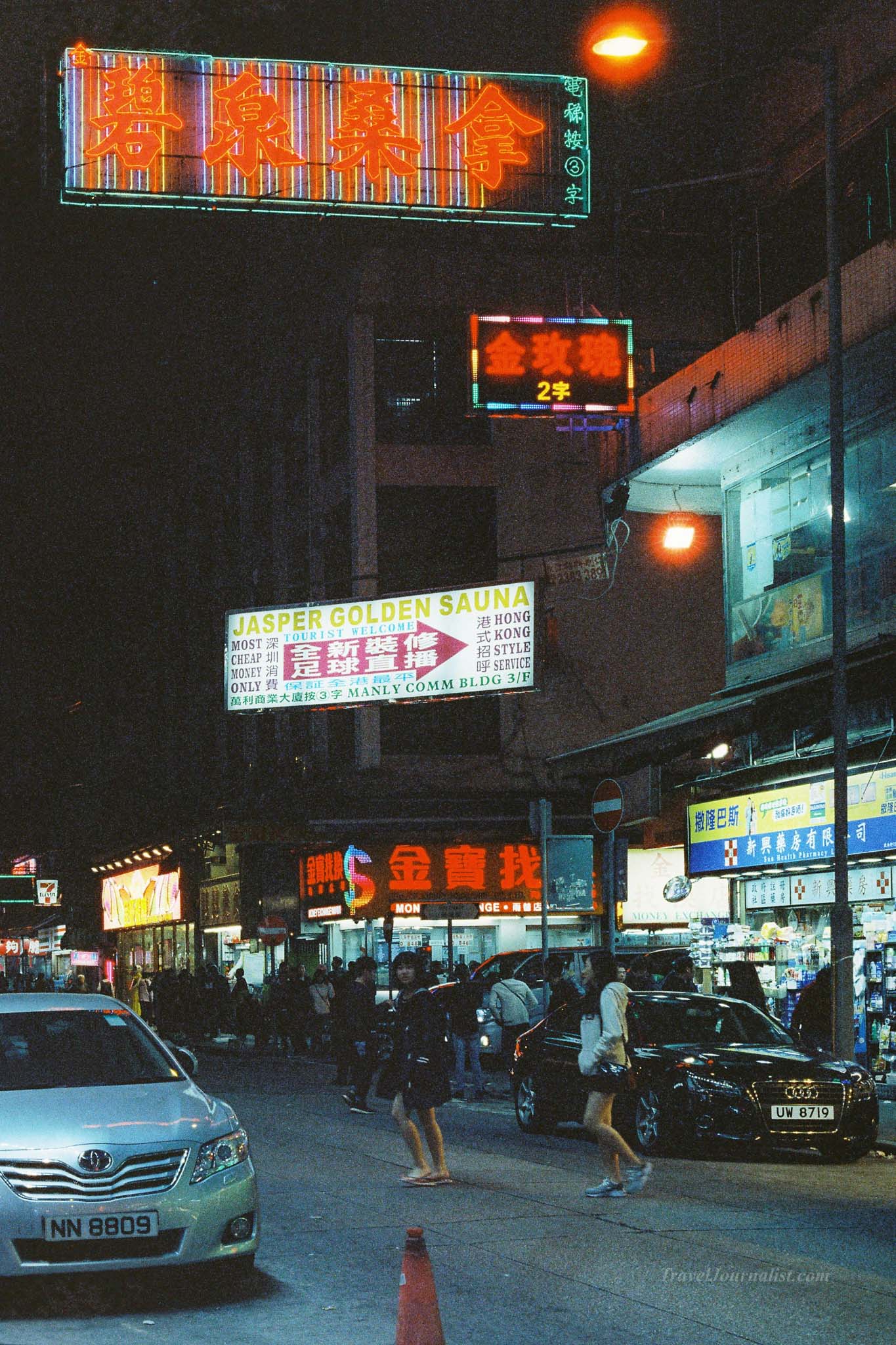 All in all I am very happy with the result, the best pictures being the ones where the signs are clear and we can see the life of the street. Other pictures were just a close up on the signs. In that case they are well exposed, and even if they are not the most interesting, I’ll be glad to have them when the neons will disappear  from the Hong Kong landscape. 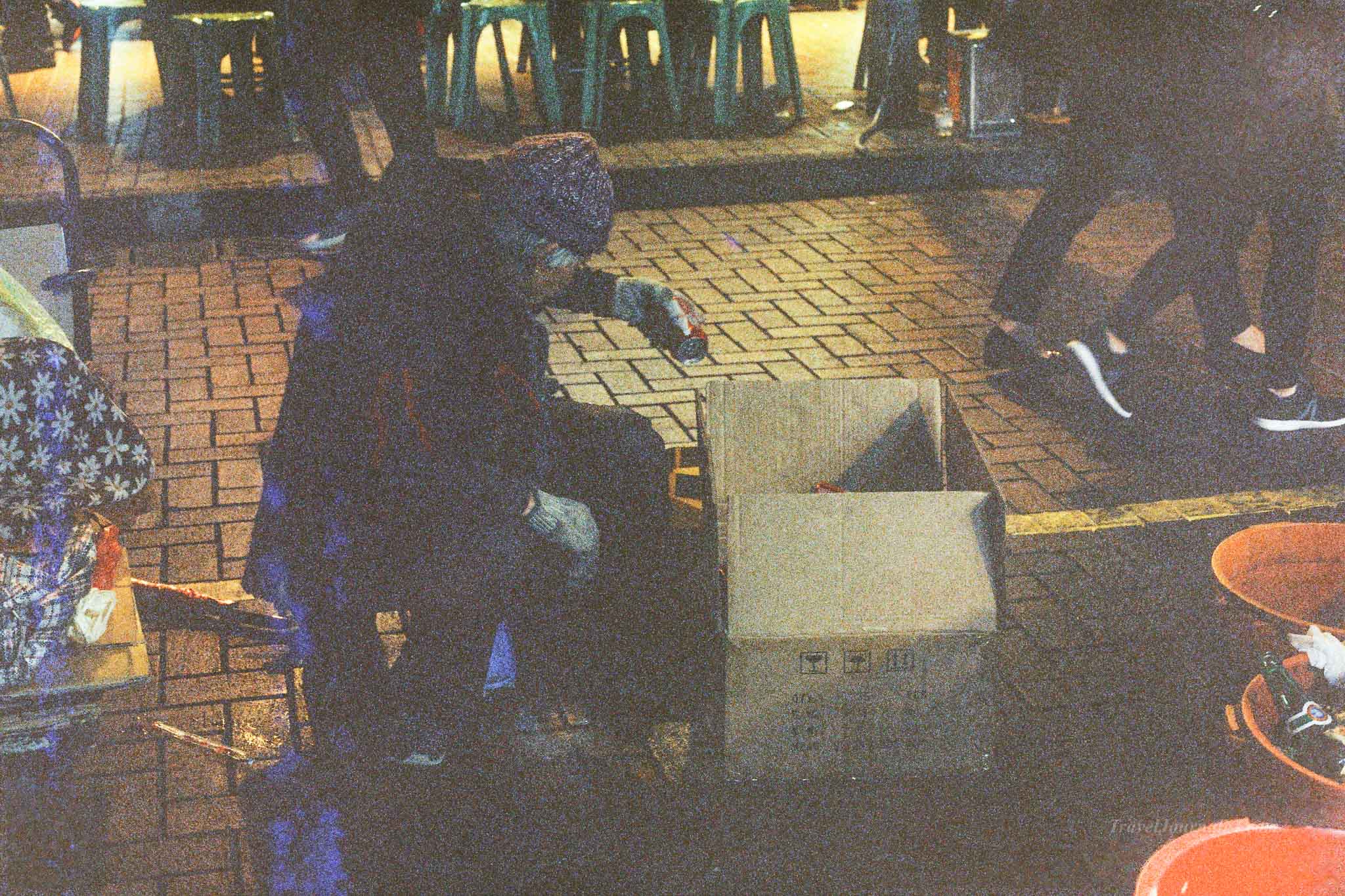 From Mong Kong, I walked towards Temple Street to visit the night market. I thought I would find some interesting nightlife in this area. The night market itself was not very lively and not interesting. I suppose that people are not anymore interested in the cheap and bad quality products coming from mainland. A few decades ago all that stuff was new and exciting for western people visiting Hong Kong, but nowadays they might be bored with that. 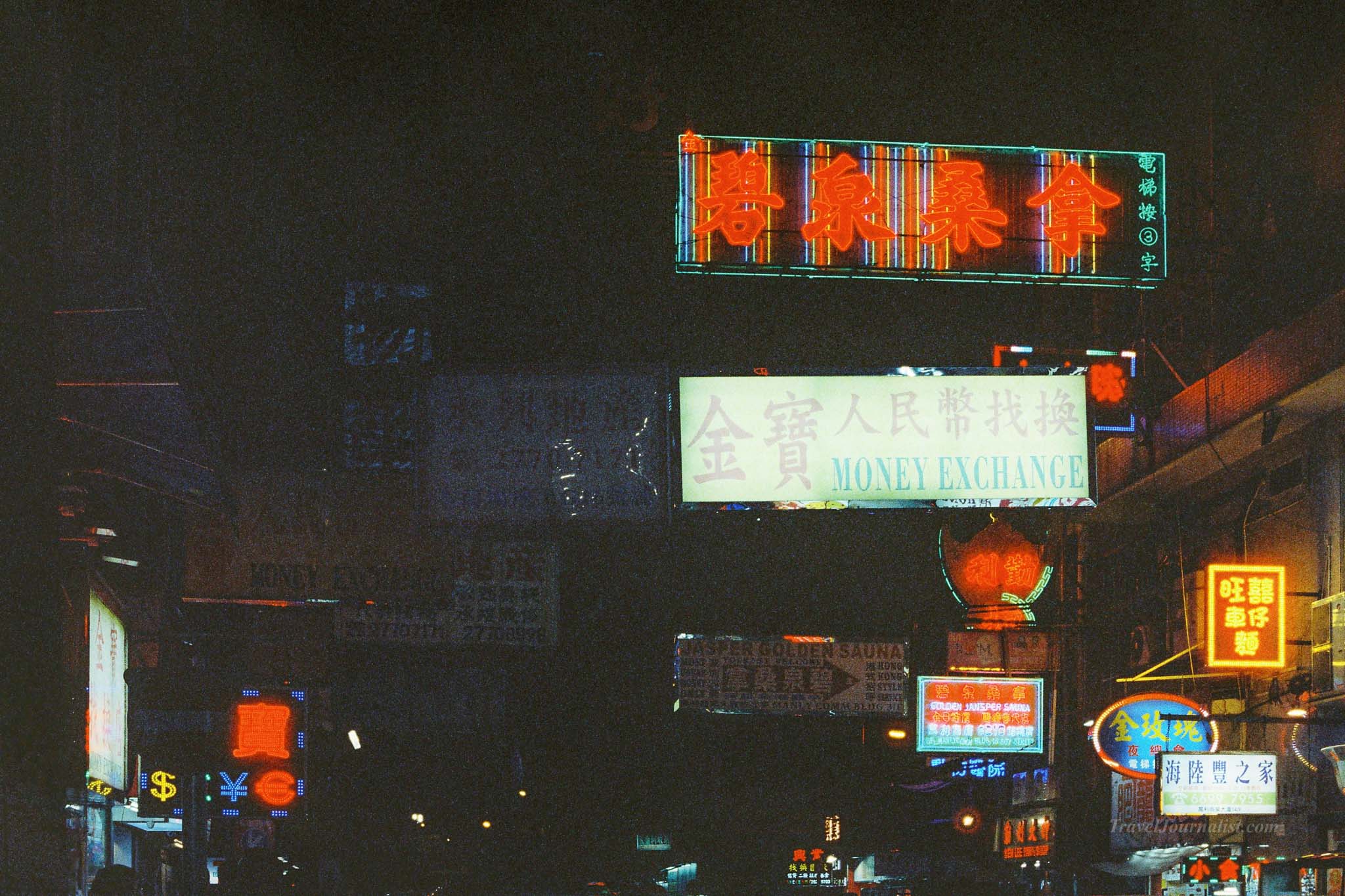 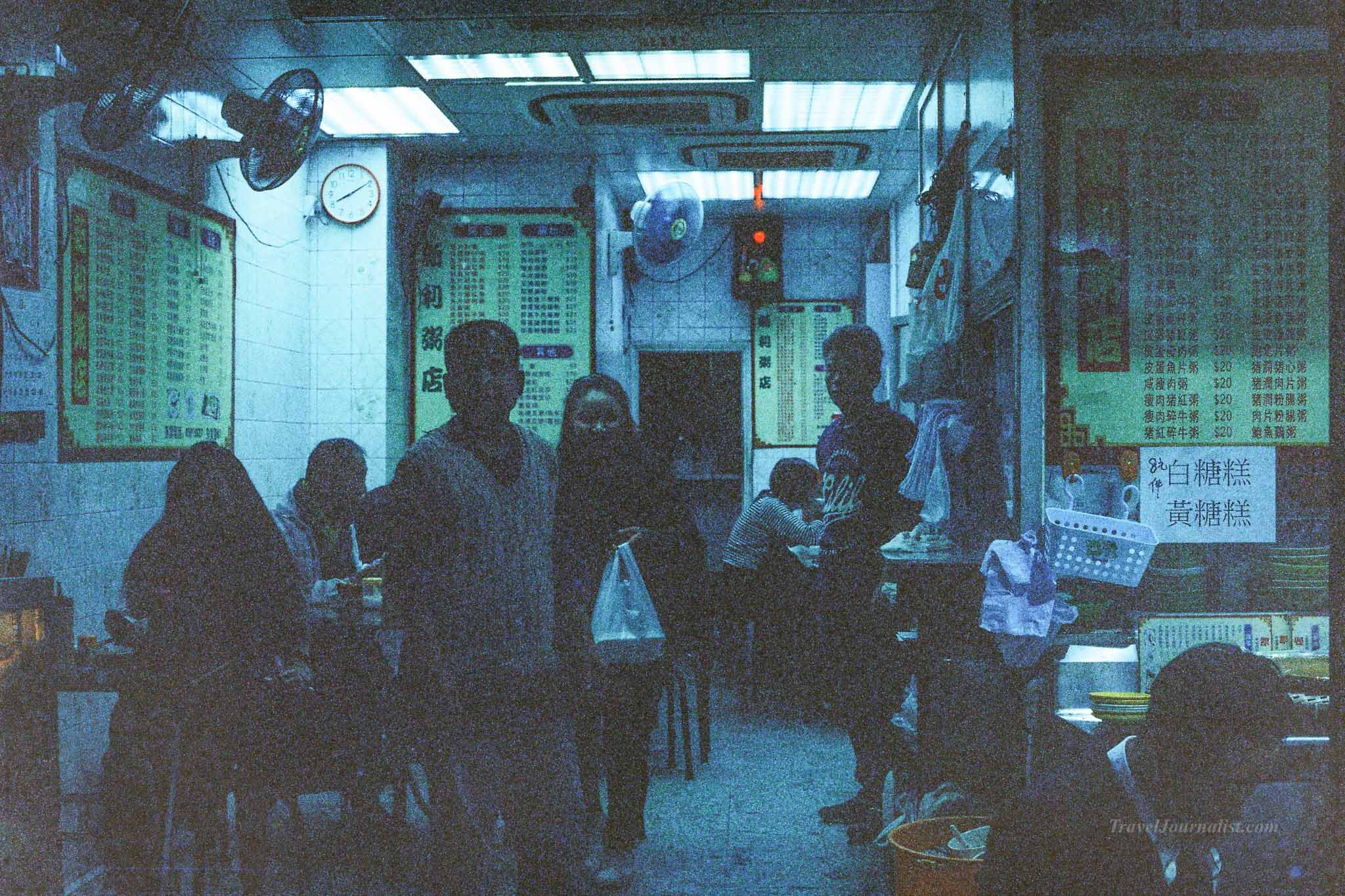 However, the life around the marker was interesting. Many locals were here, some tourists as well having a walk and looking for something to eat. I’m happy of the pictures I could get from this place as well.

these are not neon… they are LED…. 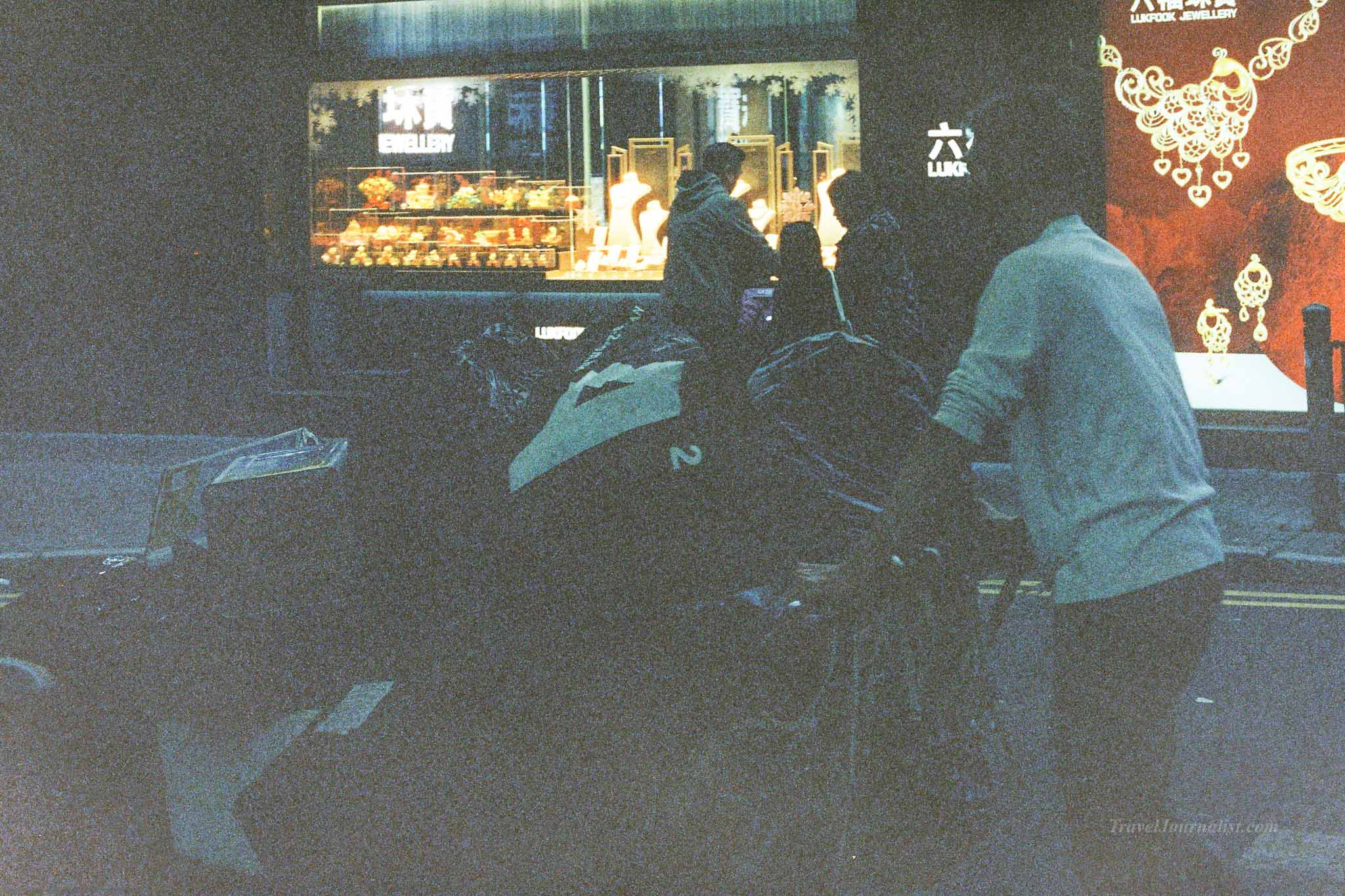 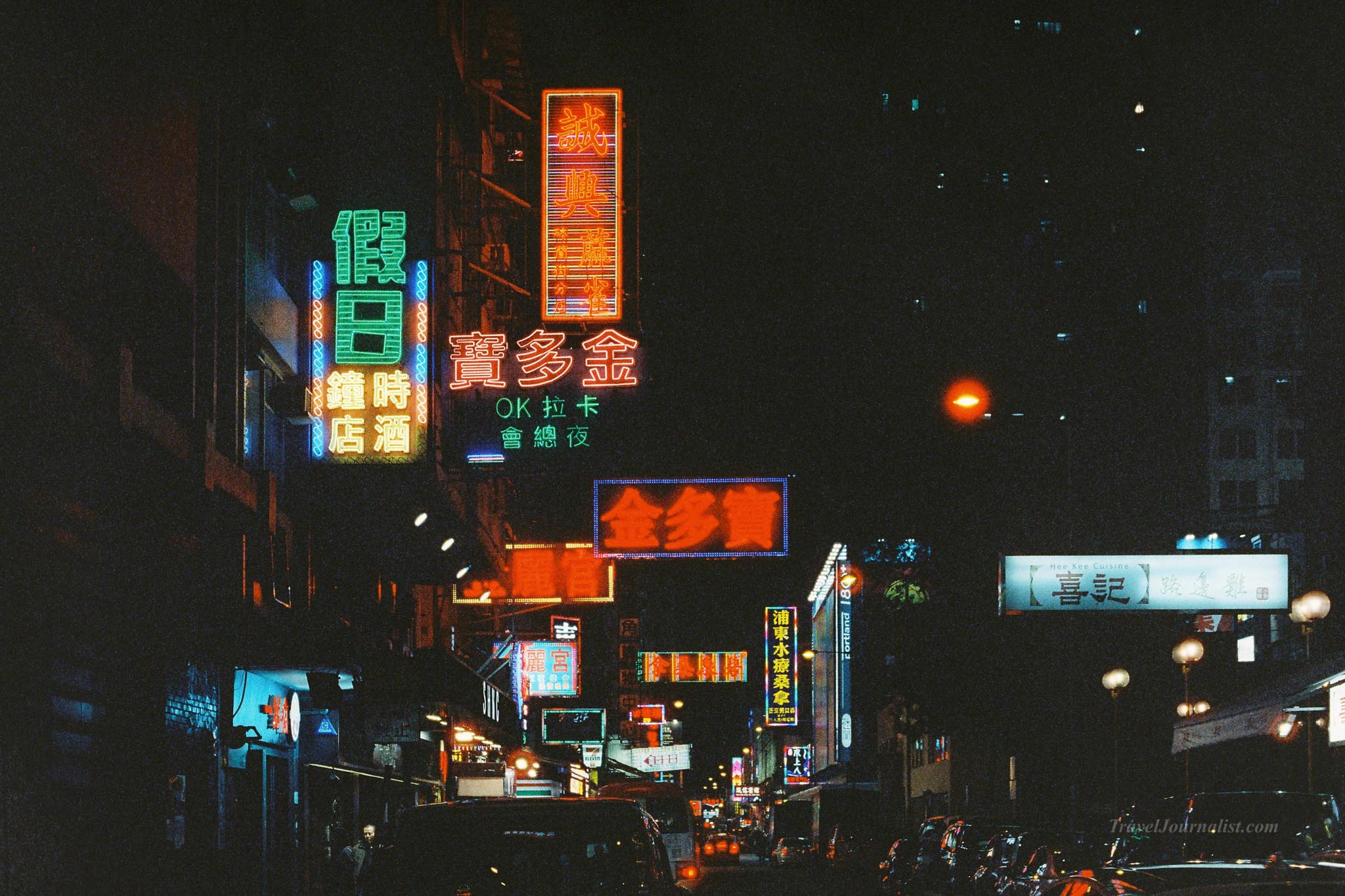 Some pictures are really underexposed, probably because I had not a lot of time to frame, focus and expose. Most of the time, I see something interesting, I have to shoot fast because  people don’t wait for me, an interesting moment last a few seconds. I’m not yet a fan of range focusing, I prefer to properly focus for every picture . That takes time, and with low light it’s challenging to see the 2 rectangles that I need to align. 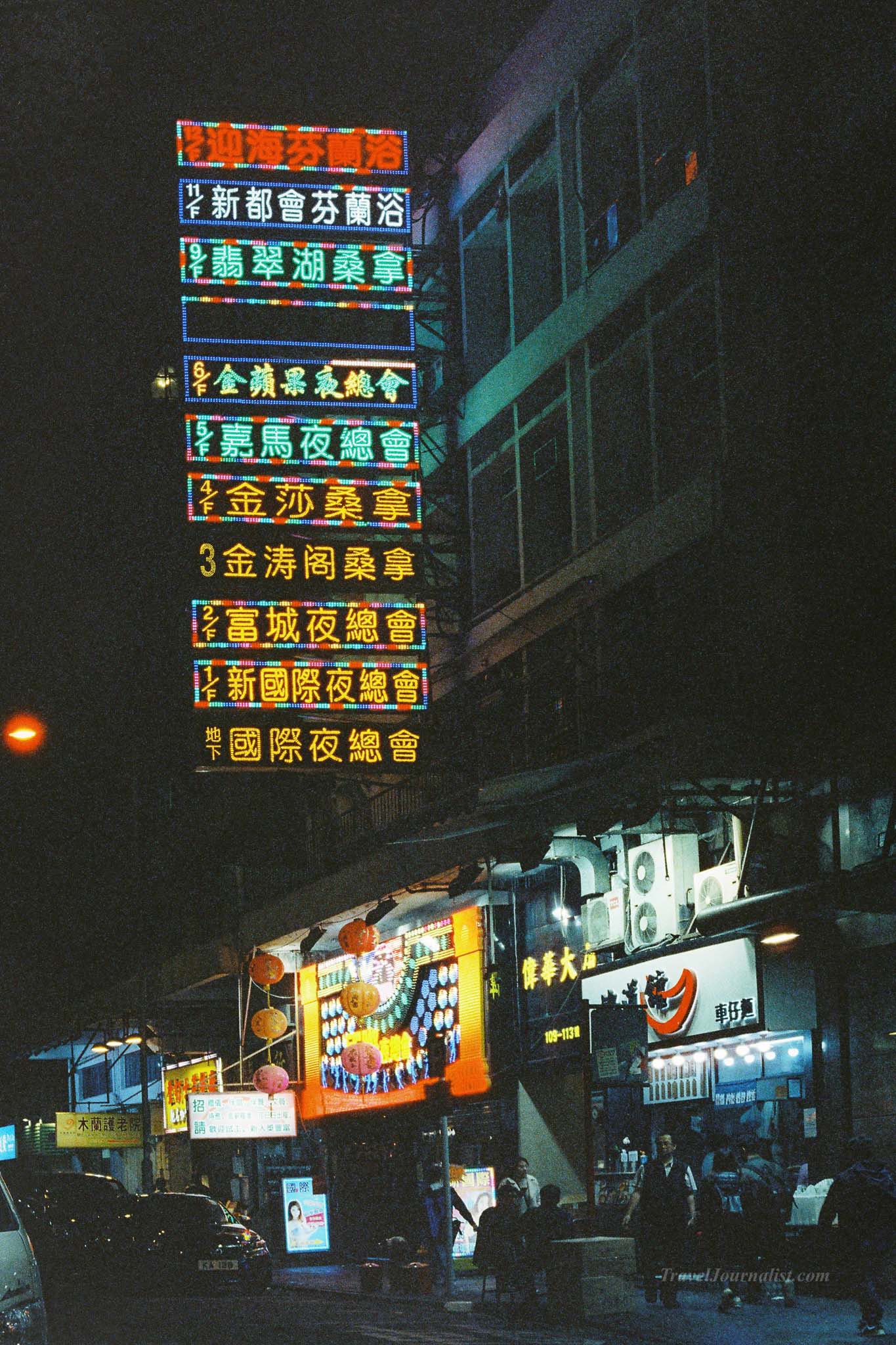 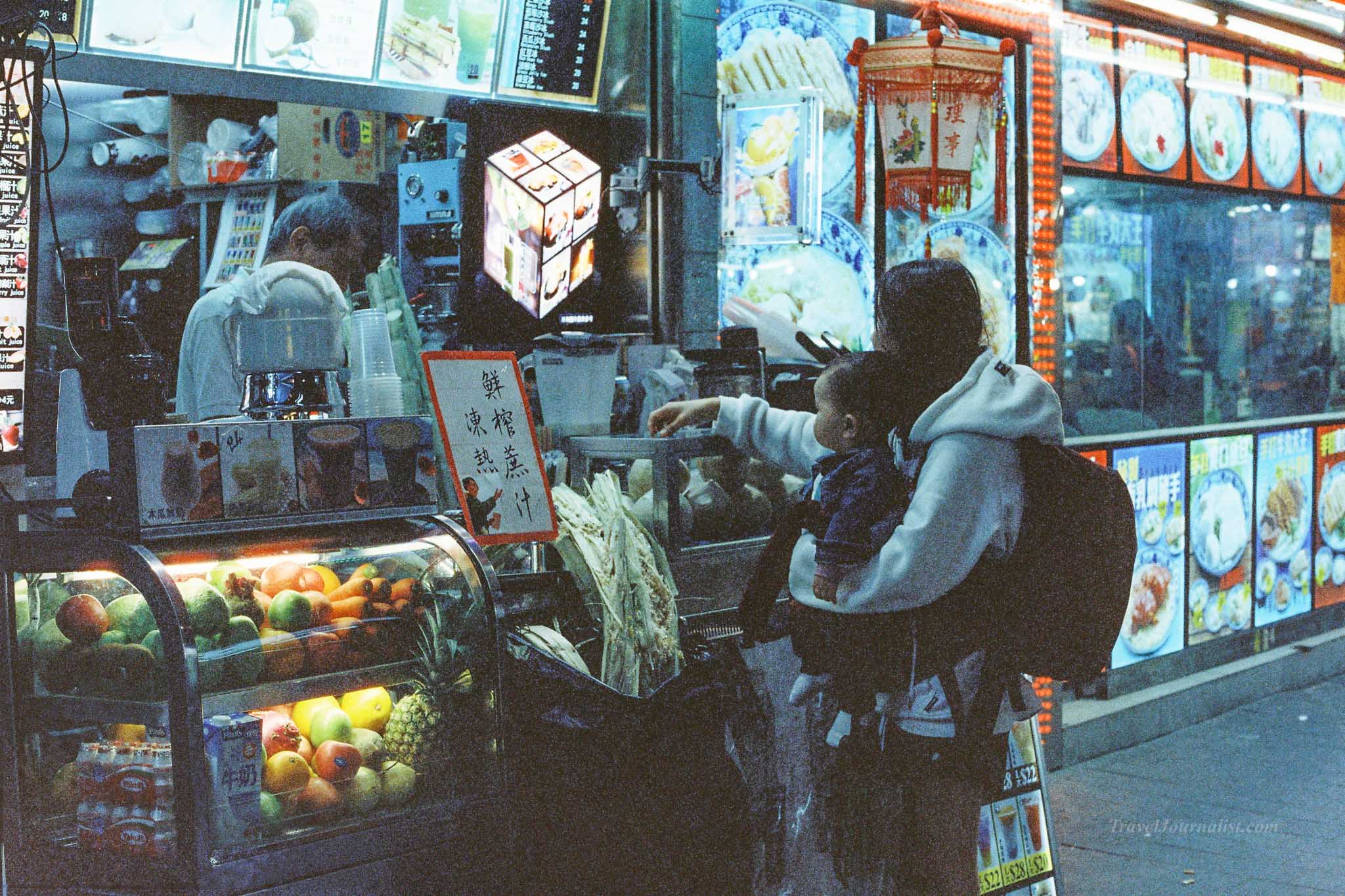 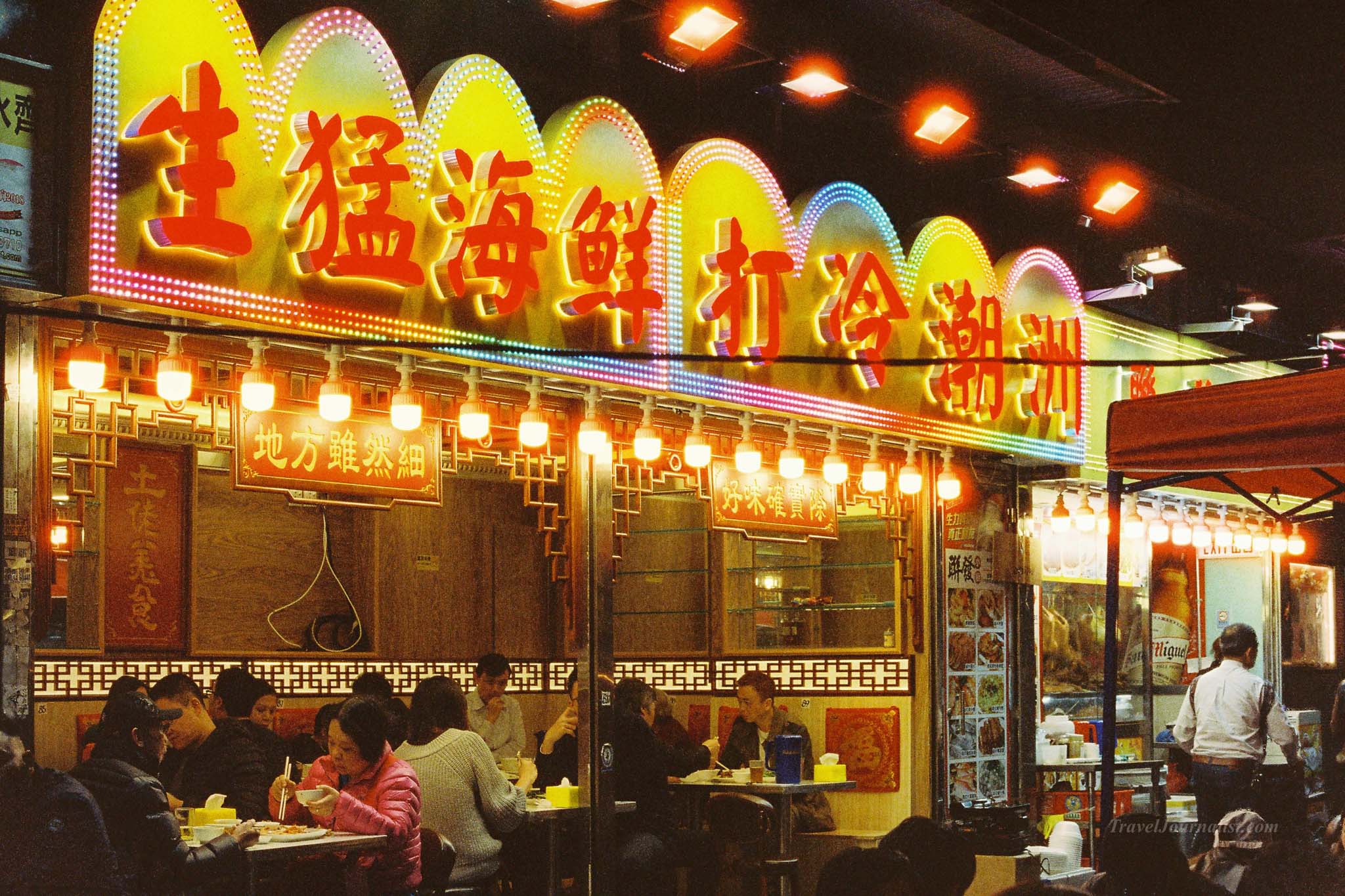 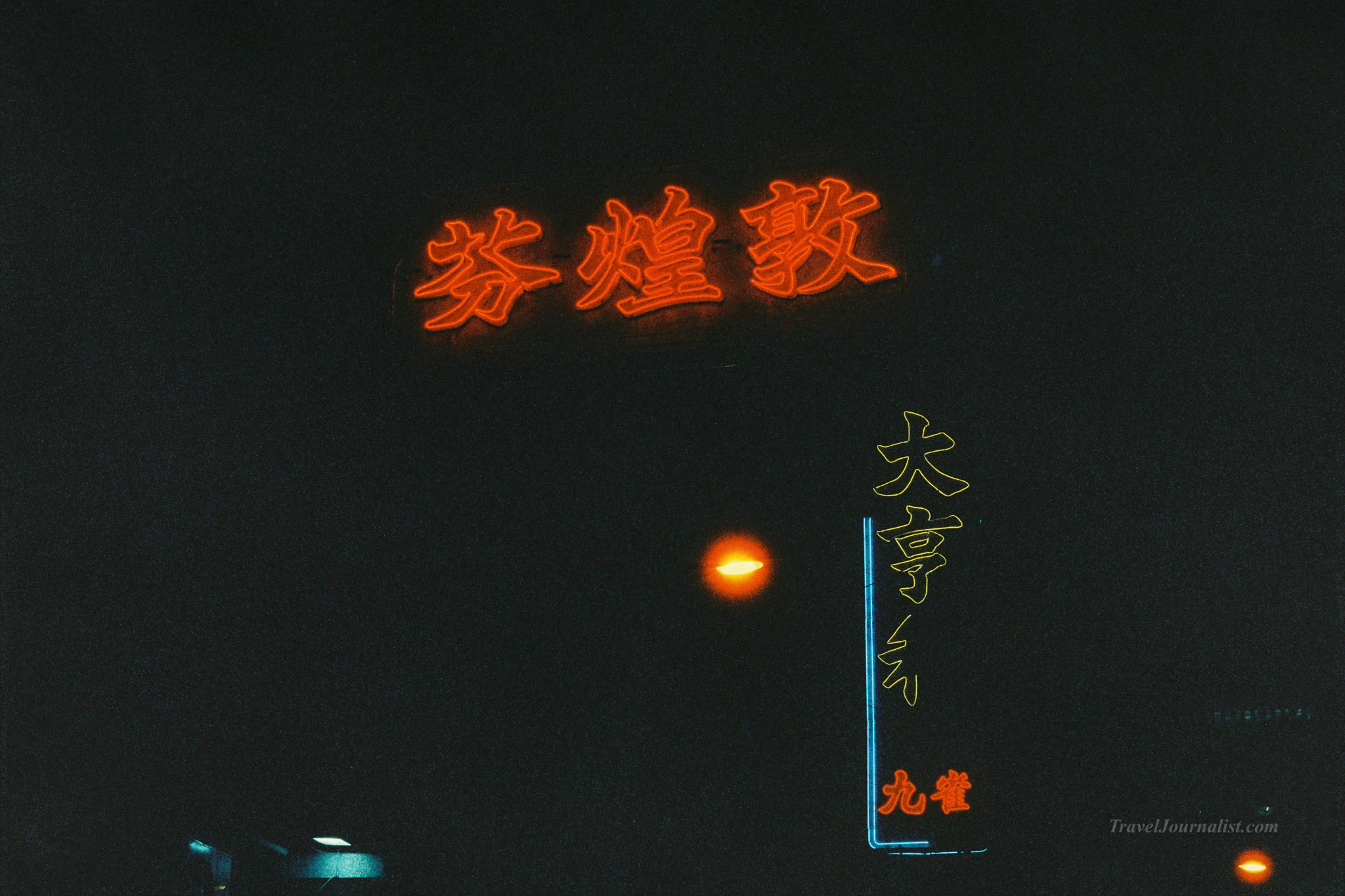 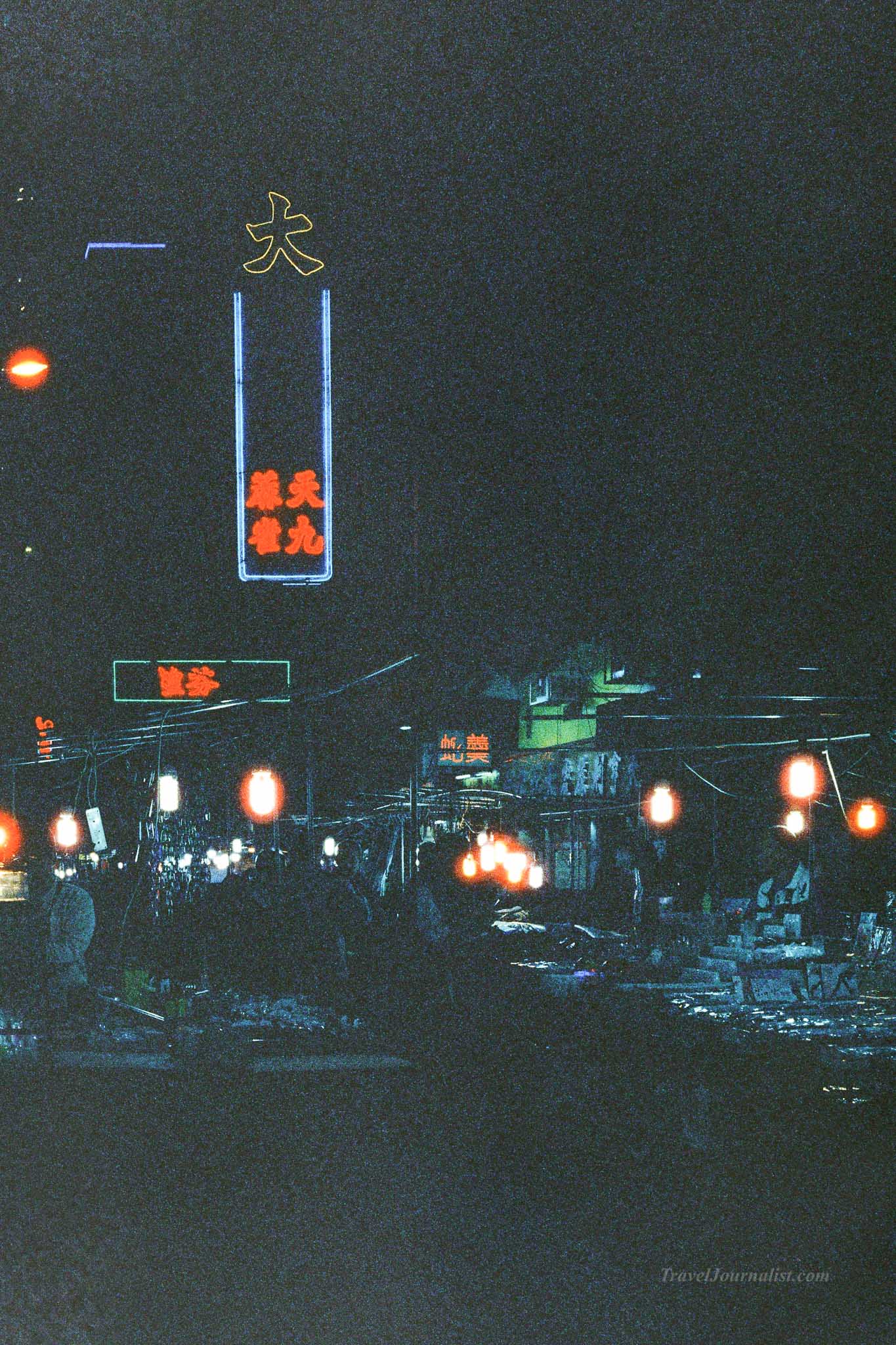 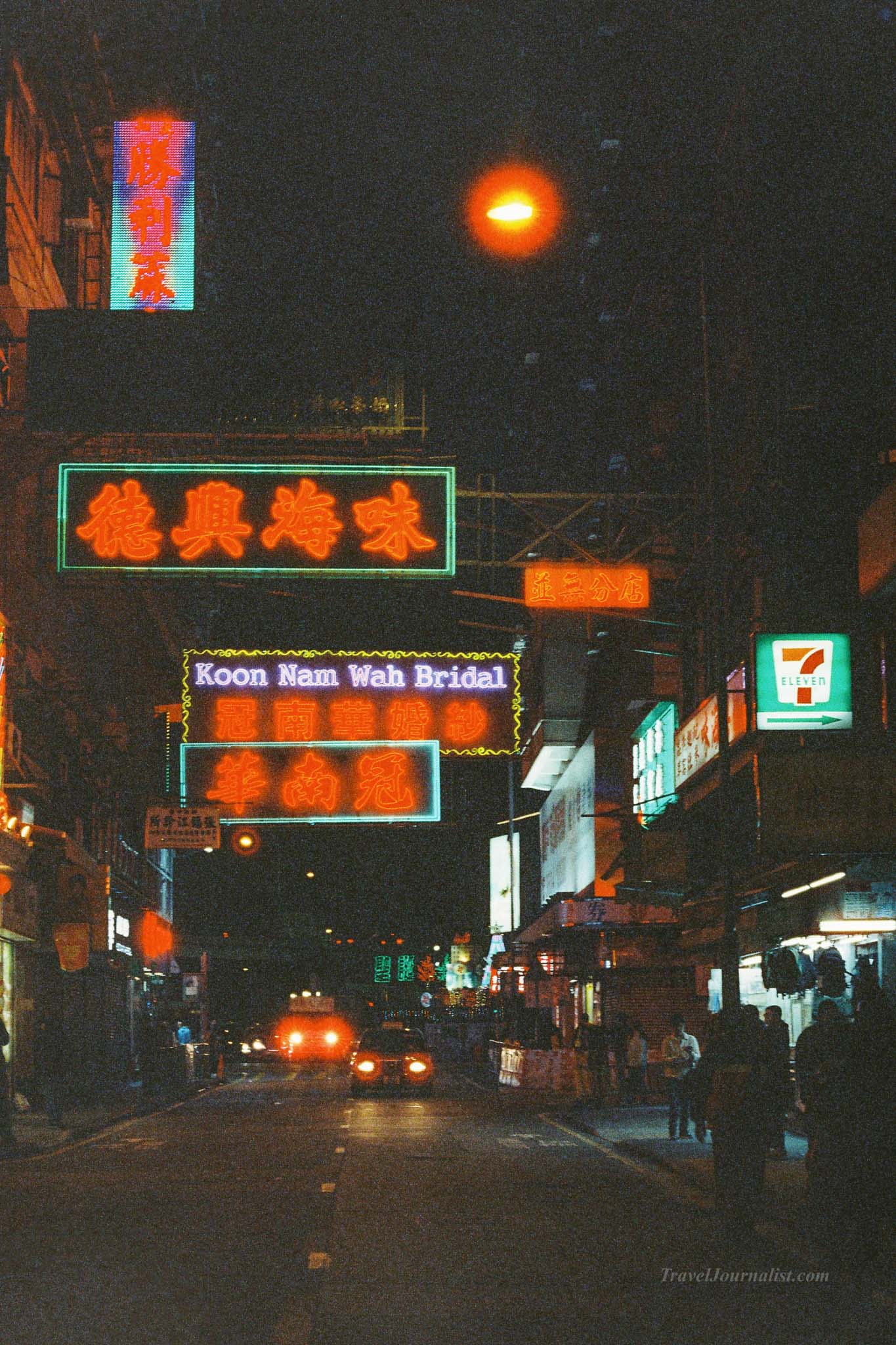 Concerning the video, I had my GoPro on the chest mount . It is very convenient, you don’t have to think about it except to push the button turn on and off the video in order to select the moment when you shoot. The problem is the lack of stability sometimes and lack of precision as well. But with a good editing on Final Cut Pro and some stabilisation here and there, you can get some decent rendering. Besides, the image quality at night is surprising for such a small and light device. 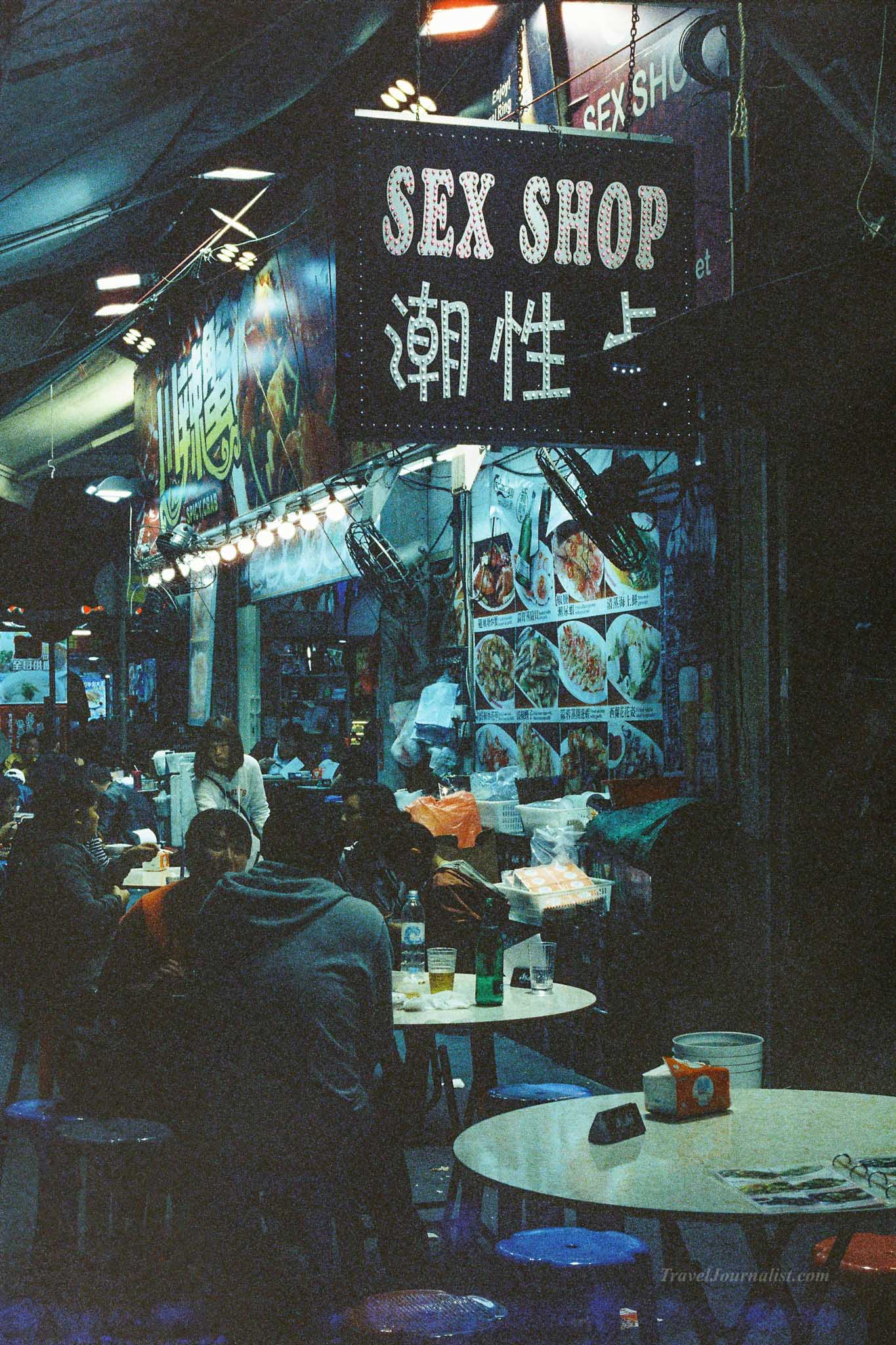 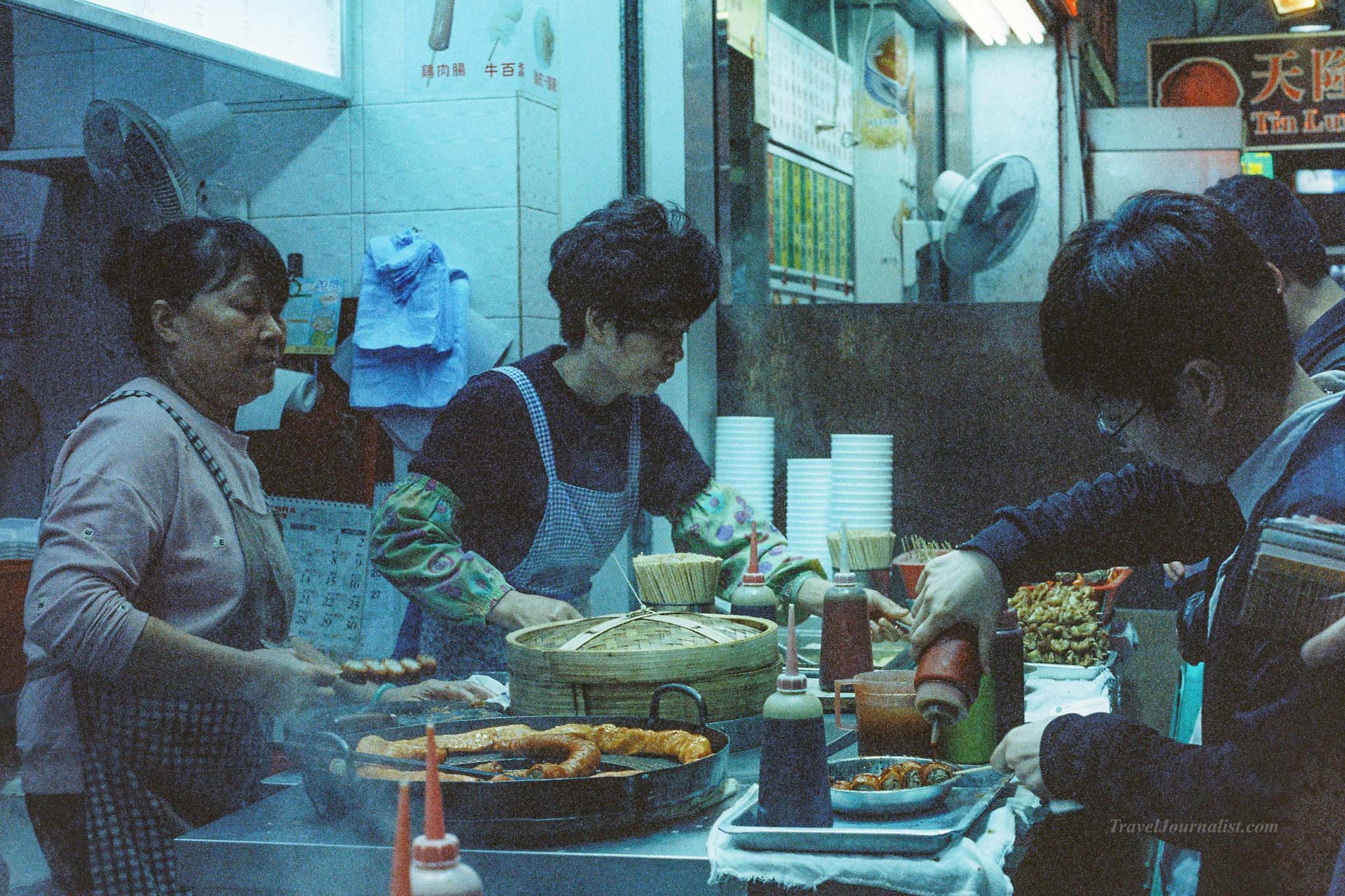 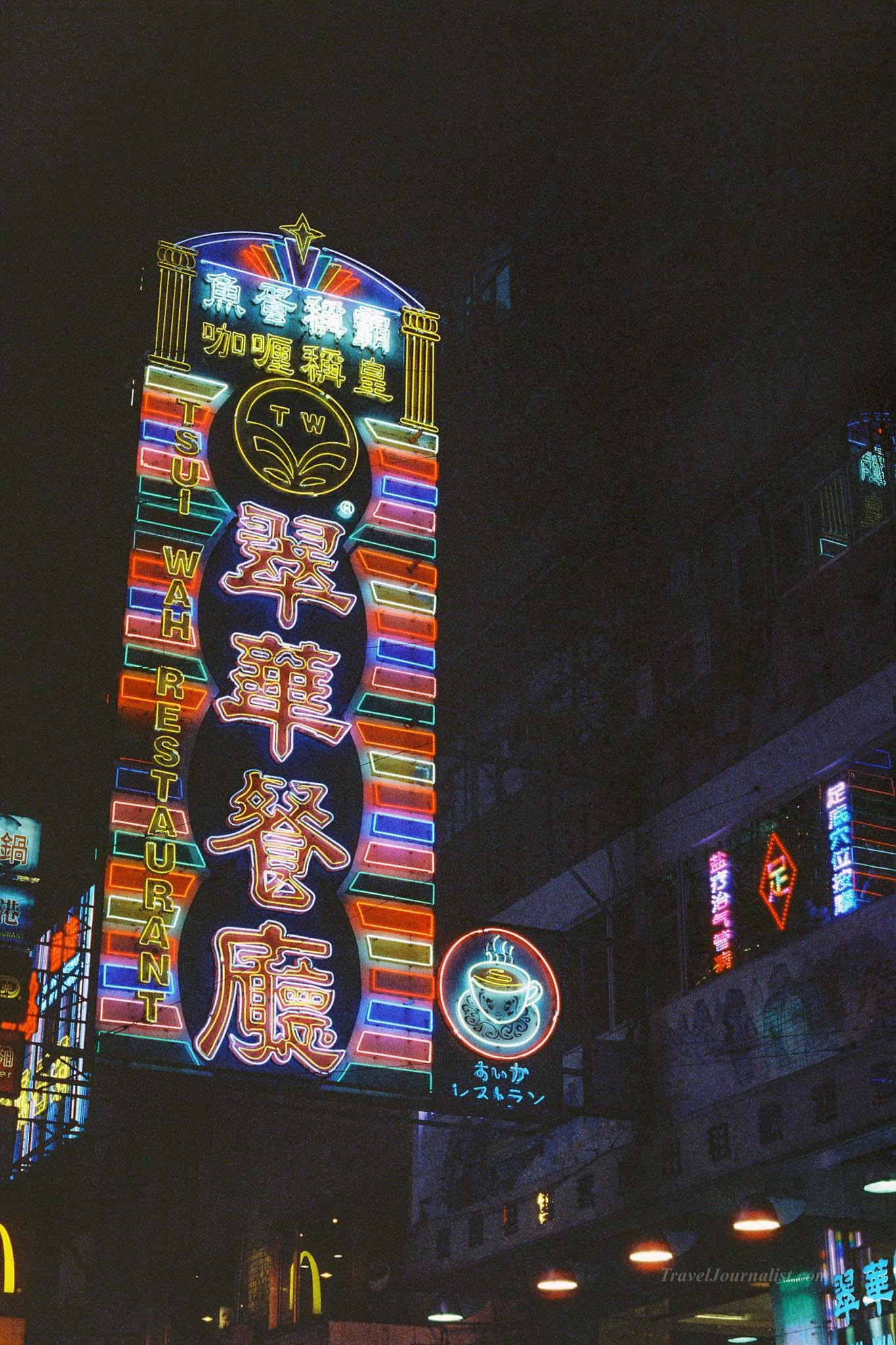 neon technology has been invented in 1910 by a french engineer, Georges Claude, who was as well the co-founder of Air Liquide, one of the biggest industrial gases company in the world. 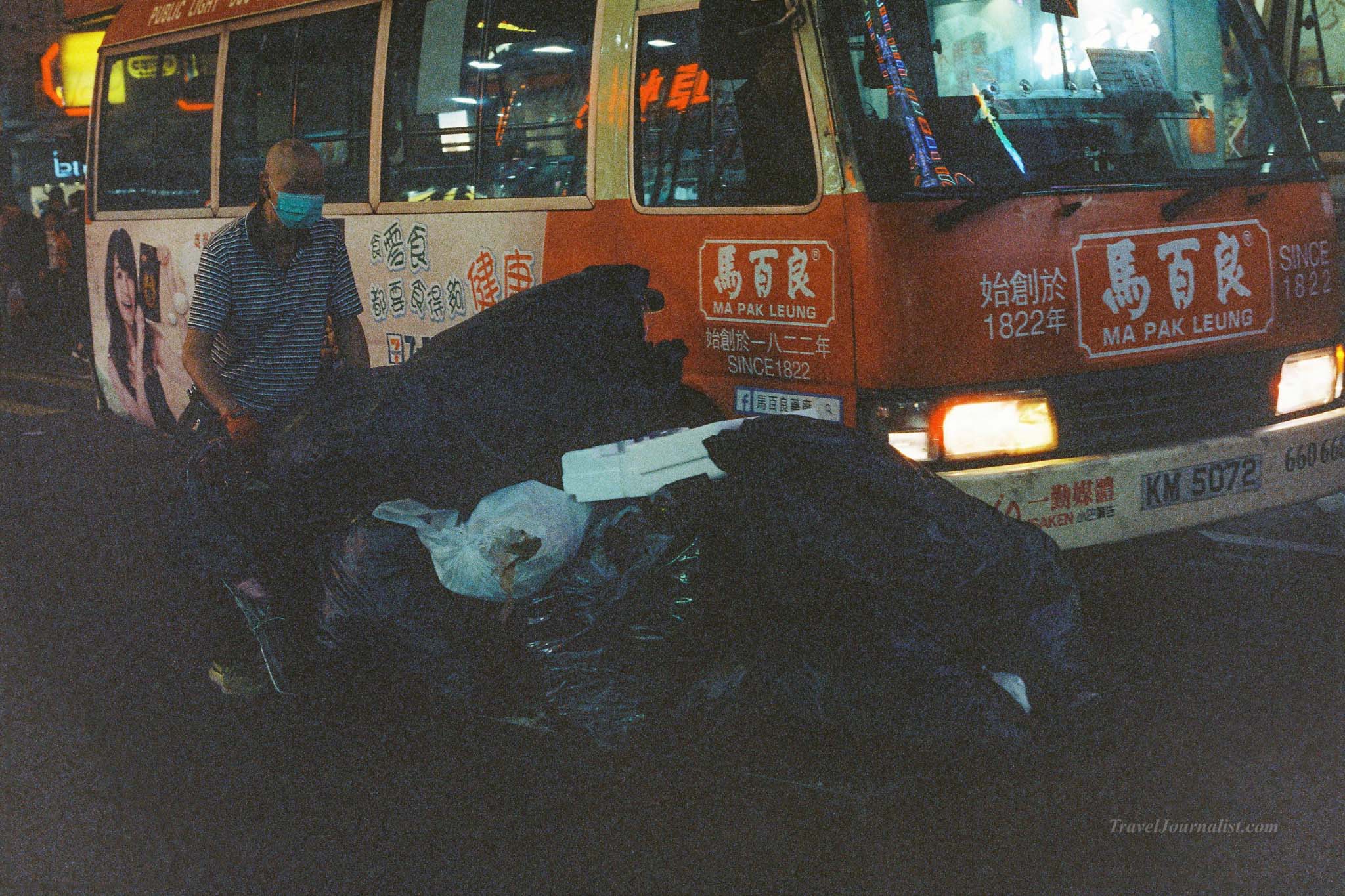 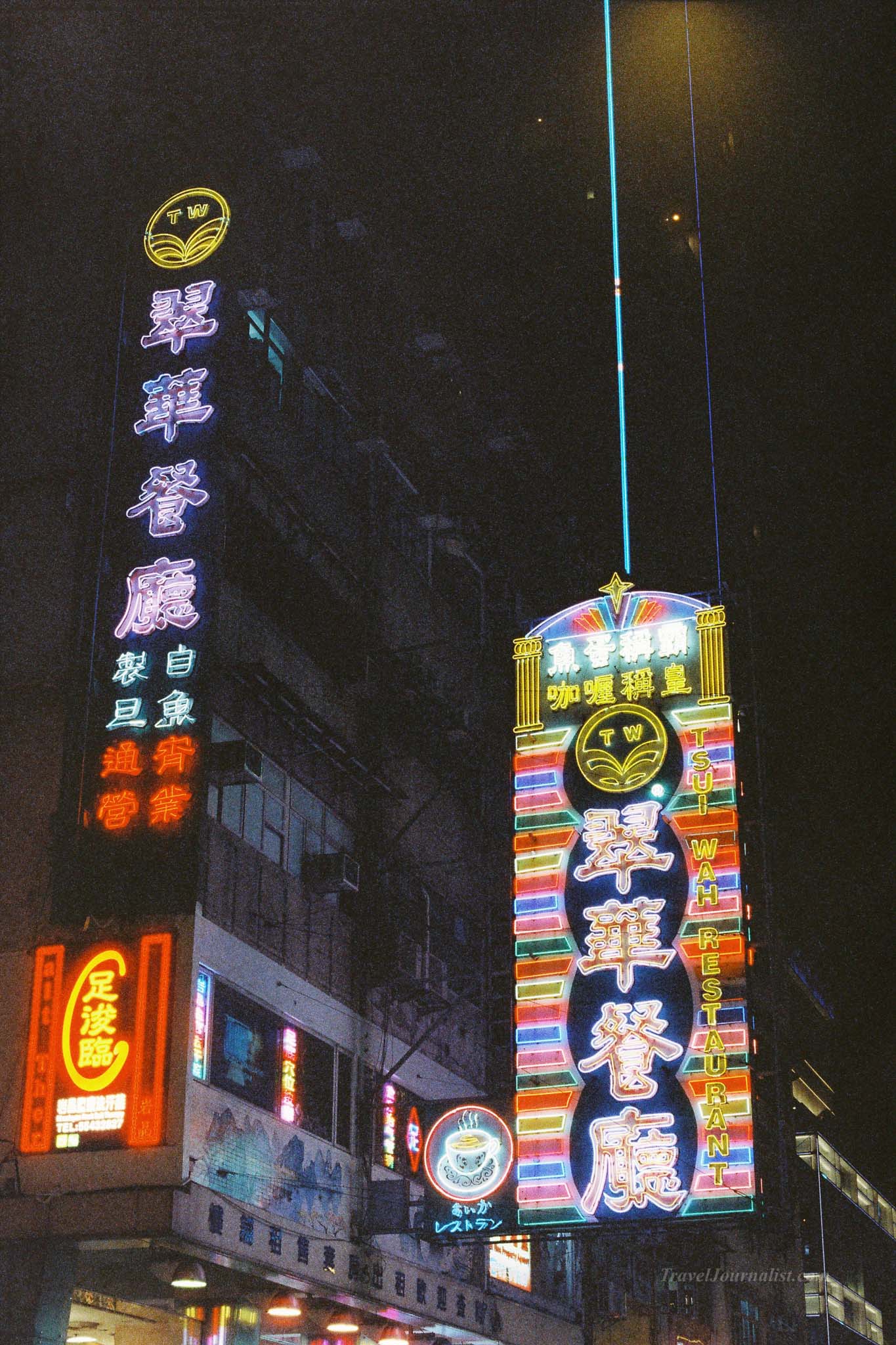 neons sings are beeing removed by the government, and Hong Kong will loose one of his iconic speciality. That’s why it’s important to shoot them as long as they are some left. It’s a way of documenting a life and an atmosphere that is gonna disappear. That’s the duty of street photographers… 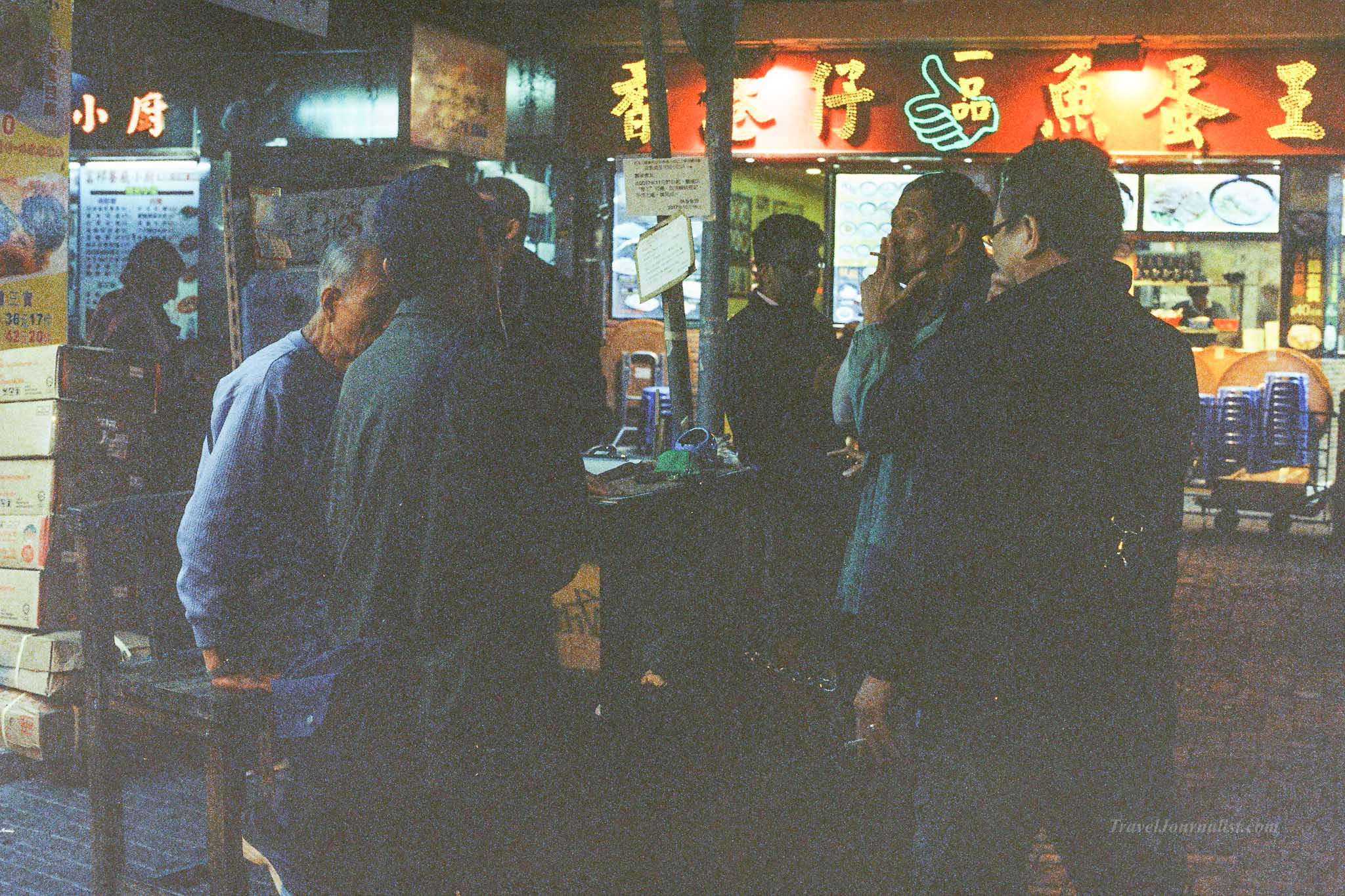